Motorbike itinerary from Urbino, in Montefeltro, through the Furlo Gorges to Fano. A tour full of curves, nature, flavors and art.

The Region of Marche it never arouses as much hype as the neighboring regions, but it offers a unique welcome and a tourism that is second to none. From coastal towns, to medieval villages, from natural beauties to excellent food and wine productions 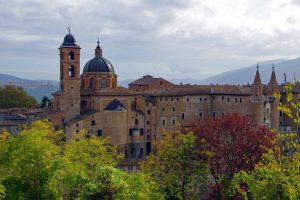 Urbino, among the Heritage of Unesco, boasts one of the most precious historical centers in Italy, protected by its spectacular walls which have been demolished several times and rebuilt over time. It is accessed by four to reach "the heart" of the so-called "ideal city”To find out that Ducal Palace from the facade known all over the world as effigy of the Renaissance. Inside, don't miss the National Gallery of Marche, for the absolute masterpieces of the Renaissance that are part of the core of the fifteenth century: from the "Flagellation" and the "Madonna di Senigallia" by Piero della Francesca, the "Ideal City" attributed to Laurana, and the "Portrait of a gentlewoman" by Raffaello Sanzio .
To enjoy the wonderful landscape that offers the Montefeltro, a walk up to the is a must Albornoz fortress. In the park of this XNUMXth century military structure, you can enjoy a magnificent view over the city and its hills. Ph. By valtercirillo, Pixabay 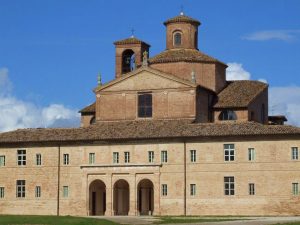 We then leave for Urbania, following the many curves of the fun SS73bs. The town is famous for its Renaissance majolica tiles and for the historic center characterized by numerous arcades (they call it "the little Bologna"). Outside the walls, the curious story of the two bridges is noteworthy: the bridge of the Cocci, due to the custom of putting the ceramics that often fell into the waters of the Metauro to dry on its shoulders; the redemption bridge where the pilgrims left some money to the Madonna to pay the ransom of the Christians prisoners in the Holy Land. Ph. By Diego Baglieri - Own work, CC BY-SA 4.0

You then take the road again, on the Provincial 55 towards acqualagna, famous for its prized white truffle and the fair that takes place between the end of October and the beginning of November. It is useless to suggest a "food and wine stop".
Shortly after the Borgo, we then come across the splendid and evocative ones Gorges of the Furlo, fossombrone, the northern access gate carved by the Candigliano river which flows into the Metauro here. Note to all the "forulus" gallery, wanted by Vespasian to allow the transit of large chariots and war machines. The tunnel, one of the most incredible road engineering operations in history, was completed in just five years, between 73 and 77 AD by chisel digging! Also remember that we are inside nature reserve where the golden eagle can be observed in its nesting period.

On the road to Fano

Before reaching Fano, always along the SS73bis, we recommend not to miss a visit to Mondavio, a splendid town still today protected by a wall and "defended" by an imposing fortress, over time dominated by the well-known families of the Malatesta, Piccolomini, Medici, Montefeltro and Della Rovere families. 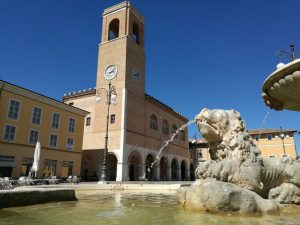 Driving on the gentle curves of the state road, from the hills you can see the sea, in a landscape that resembles a painting, in particular from the eighteenth-century church of San Salvatore and the Camaldolese convent of Mount Jupiter. Finally we come to Fano, whose entrance is dominated byArch of Augustus. The city hosts many evocative views and we recommend that you tour it all, from the Renaissance lodges of San Michele to cathedral, To piazza XX Settembre with the known Palazzo della Ragione in its entirety with the Malatesta Court. Ph. By Aetio65, Pixabay

Starting from the inside, in addition to the truffle of Acqualagna, to try are Dop cheeses such as Casciotta of Urbino, cured meats preserved in beeswax or under ashes, to be enjoyed with the traditional piadina, or rather with the crescia. And if you have "opened a chasm" then ask for the exquisite tripe from the Marche region, poor dish and region icon. Once on the Adriatic you cannot miss the exquisite "broth“, Made with at least ten different types of fish.

The castles of the Marches by motorbike