All attendees were thrilled with the 1.350 km of marked paths, incomparable landscapes and the impeccable organization of Adventure riding who has been able to make happy both the hard and pure motorcyclist, always focused on the track to follow and the curve to brush, and the biker eager to enjoy the scents of Sardegna and its breathtaking views.

Over 60 subscribers, more than double the 2018 edition. BMW of all types and displacements, KTM road and dual, many african twin, Triumph e SuzukiTwo Honda XAD extension and even one patrol di Quadro Coder which have demonstrated incredible versatility on any terrain. They all traveled together, following the GPS tracks, over a thousand kilometers of woods, stony ground, panoramic roads and passivated montani through theOgliastra, barbagia, Gallura.

The tour was also and above all organized under the banner of safety. The only one RIDER which, due to a puncture, which cannot be repaired on site, was promptly recovered together with his motorcycle and transported to the end of the stage where, thanks to mobile workshop, it was possible to solve the problem so that he was immediately put back on the road for the next stage. While the only one RIDER, who suffered a slight injury, was instead promptly rescued and treated on the spot by the "doctor" who followed the participants driving his KTM along the entire route.

Garmin she was always available every day to explain the use of the tracks with the various navigators of the participants. Which is not always easy due to differences in models and brands (they were saints!). Nobody got lost and everyone dedicated themselves to the practice ofAdventouring following the GPX tracks, full of hiking Waypoints and designed for safe navigation.

Another excellent partner, to which our thanks go, was the Moto Club MCM Gonnesa, organizer of the event together with Adventure Riding, which resolved all the technical / bureaucratic issues with the administrations of the island, which have always shown themselves to be hospitable and benevolent towards the Sardinia Gran Tour, authorizing travel on stretches of road usually forbidden to circulation.

For more information and future events visit the site www.adventureriding.it 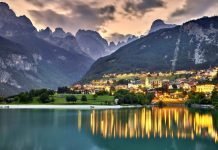