An itinerary all on the sea to go and discover the wonders of the Cilento coast such as Castellabbate, Palinuro, Acciaroli, Maratea.

If you want sea, beaches and excellent cuisine, you can only head south of Salerno, in the direction of Marate, the starting point of the famous journey of Rocco Papaleo, Basilicata coast to coast.

The road that leads from Salerno to Cilento is quite boring, but you can make a short stop among the numerous dairies along the way to taste a mozzarella doc, or visit the Archaeological Park of Paestum, one of the most beautiful ever. The excavations are known for their three ancient Greek temples, which are still in an excellent state of conservation today. Outside the temples of Paestum, we can find the remains of the old city in the modern hamlet of the municipality of Capaccio, in the province of Salerno.

Agropoli, whose name derives from the Greek and means "high city" due to its position perched on a promontory, is a city rich in history, starting from the Greek-Roman era. The village of Agropoli preserves its ancient historical center and part of the walls. The Angevin Aragonese Castle it is located on the top and from here it is possible to admire an enchanting view of the sea and the Punta Fortino Lighthouse of 1929, perfectly active at present. There Furnace of Agropoli today it is a museum center home to exhibitions, cultural events and food and wine tastings. Not to be missed, in addition to the beautiful beaches awarded with the Blue Flag, the Mother Church of Saints Peter and Paul e the Santa Maria of Constantinople.

A corner of Campania immersed in nature and where life is still subject to slow rhythms. The village of Castellabate, now extremely famous for the film welcome to the South. Here you can visit the Castle of the Angel (built starting from 1123), which belonged to the abbot San Costabile Gentilcore, to which local history is strongly linked. At its foot lies locality Santa Maria and looking further towards the horizon, in clear sky conditions it is possible to see the Gulf of Sorrento even up toIsle of Capri. We continue towards the locality of Punta Licosa is the southern limit of the small gulf of castellabate, a sparsely inhabited and very suggestive area from a naturalistic point of view, ideal for hiking along the cliff.

Acciaroli is an ancient fishing village with typical stone houses. Federico II wanted to protect the Cilento territory by providing it with a complex of 58 defensive towers, which covered the stretch between Agropoli and Sapri and here you can admire the Norman Tower, which dates back to the end of the XNUMXth century. There Church of the Annunciation it is, together with the Tower, another historical place that deserves a visit. If, on the other hand, you want to dive directly into the sea, you can choose from the following beautiful beaches: Big Beach, also known as the "pearl of Cilento", and a series of only free beaches, such as Caleo beach, so called because it rises near the tower of the same name.

Among the most beautiful beaches of Cilento there are the beaches of Palinuro, wide and sandy, as well as awarded the Blue Flag. Among the best known are: the Saline beach, the Dunes and that ofNatural arch, In addition to Buondormire beach, accessible only by sea. do not miss the caves of Capo Palinuro, which have nothing to envy to the Blue Grotto of Capri.

Sapri, symbol of the Risorgimento with the Monument to Carlo Pisacane and, positioned on the Scialandro rock in 1994, the bronze statue depicting the Gleaner by Sapri. to visit the historic village "Marinella”, Behind Piazza Plebiscito, the Church of Santa Croce and the Specola, an astronomical-meteorological observatory tower 15 meters high and built in 1927.

Baptized the "pearl of the Tyrrhenian Sea"Is as small as it is rich: sea caves, silent beaches and lush mountains that plunge into transparent waters, Maratea it is one of the most visited tourist destinations in Basilicata and an ideal stop for those who love the sea. Who practices snorkeling o immersione here you can immerse yourself in clear waters and discover beautiful backdrops. The village of Maratea has the typical beauty of small Mediterranean towns, with white houses and narrow streets that are lost in romantic squares.

The huge statue of the Christ Redeemer (second in size only to that of Rio de Janeiro), tall twenty-one meters and built on the top of Mount San Biagio. Sausages, Senise cruschi peppers, vegetables or first courses such as Ciaiudedda and Fish Soup.

If you are traveling in the summer, you should book a hotel in advance as the area is extremely busy in the high season.

Delia Morinelli, now 84, for over thirty years she was the cook of the American scientist Ancel Keys, founder of the Mediterranean Diet.

Other itineraries in the area

Conca dei Marini and the Amalfi Coast by motorbike 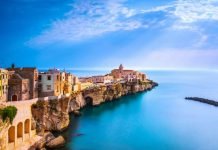 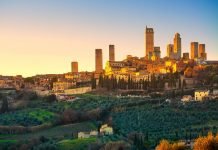