From Edolo to Dimaro, the most pass of Tonale is the fastest and most direct between Lombardy and Trentino, open all year round.

Point of connection between Val Camonica and Val di Sole, the Tonale divides Lombardy and Trentino, for an itinerary through woods and invantevole landscapes.

During the season we take a day to walk the Passo Tonale and perhaps connect other destinations to the itinerary such as, for example Madonna di Campiglio and Val Rendena.

The Pass opens at 1883 m. between the Ortles group and the Adamello group and connects Val Camonica with Val di Sole. During the First World War, the Tonale pass was reached by Italian troops from the first day of the war, and in the following days the The occupation was extended on the wings, linking important positions to our line, such as the Montozzo pass and the Ercavallo ridge. Passo del Tonale is a very ancient toponym, mentioned for the first time in 774 as "Thonal" in a diploma of Charlemagne for the contribution of Val Camonica. According to the most accredited etymologies, the name "Tonale" derives from an attribute of Jupiter, "Thonante"; here, in fact, the climate is also characterized by the frequency of thunderstorms which hit the area with great violence. Hence the consecration of this important pass in the Rhaetian Alps Southerners.

From summer skiing on the glacier, to the possibilities for excursions, trekking and the arena for mountain biking: the ascent to the lakes of the river bed is particularly suggestive Presena and to Capanna Presena, at almost 3000 metres, the ascent to Presanella, to Passo Paradiso where in the Gallery you can visit an evocative set-up of sounds and voices bearing witness to the White War.
Beyond the pass, the ascent to the peaks of theAlbiolo, which was the scene of battles where the entrenchments can be visited. On the pass stands an ancient hospice, with an adjoining church dating back to 1127 dedicated to San Bartolomeo. At Passo del Tonale it is possible to ski even in the late hours autunno and in late spring on the 30 modern and avant-garde lifts present, for 100 km of slopes, including the black Paradiso, one of the longest and most exciting descents in the entire Alpine arc. The skiable domain has expanded thanks to the connection of the Tonale lifts with those of Ponte di Legno – Temu in Lombardia.
Tonale offers numerous accommodation facilities and services. Many sports teams attend the Tonale throughout the long winter season thanks to the artificial snow.

Let's start from Edolo, a place that offers ideas for itineraries such as Aprica, the Crocedomini pass or the Mortirolo pass. We take the SS42 to travel the 34 kilometers of pure enjoyment that separate us from the Pass. The road offers an excellent road surface, wide carriageways and smooth curves. Let's not exaggerate with the gas to be able to enjoy the landscape. Once at the pass we stop to visit the war memorial and drink a good coffee, but then throw ourselves back on the SS42 up to Dimaro, in Trentino. Here we can continue to Val Rendena e Our Lady of Campiglio, up to Brescia est to go and take the A4 towards Milan, or lengthen ours itinerario aiming at Passo Crocedomini from the SS237.

Link to the map 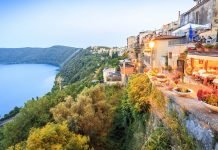 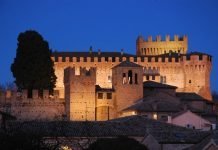 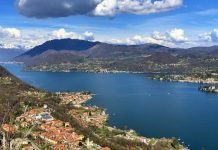