Home Travel guides and tips Most beautiful villages in Italy In motion between Norcia, Castelluccio di Norcia and the Flowering 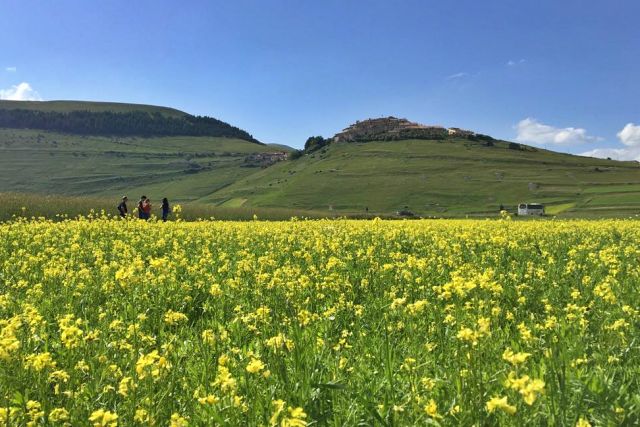 We cross Umbria, towards Norcia and Castelluccio di Norcia, to discover Italy and its most authentic and fascinating places, even those that risked being canceled by the will of mother nature.

Discover with us on motorbike the charm of the ancient village of Norcia, mutilated by the earthquake, and the beauty of the flowering of Castelluccio di Norcia

Norcia, deeply affected by the last earthquake, she tries to slowly rise again amid a thousand difficulties but still preserves the charm of her works that partially resisted, but even more shows the tenacity and affection of the citizens who struggle to return to a normal life together to their beloved village.

Much of the historic center of Norcia is today again visitable. The most evocative glimpse is undoubtedly that of San Benedetto square, the heart of the city. In the middle the statue of the patron saint, around the most representative monuments, namely the Basilica of San Benedetto, of which the earthquake left only the facade standing, the city ​​Hall and Castellina. Next to the latter you can see the now cut profile of the beautiful Cathedral of Santa Maria Argentea. To date, unfortunately, none of these beauties can be visited. Despite this, the square still exudes a particular charm and fortunately there are many visitors who return slowly and more and more.

The rest of the city is a maze of picturesque alleys, marked by time and wounds. There are numerous profiles of churches that embellish Norcia. Unfortunately, after 30 October 2016, they have all been severely damaged and therefore it is not currently possible to enter. To mention just a few of the best known: Saint Francis (seat of the municipal library) with its beautiful cloister, the Madonna dell'Addolorata, Saint John, Santa Rita, Sant'Agostino. Photo by Proloco Norcia

Very pleasant it is also the walk around the walls, along the entire perimeter (not very long), to admire the features seven doors that mark the access to the city.

Norcia, however, is not only the historic center: we have walked around, indeed walked in motorcycle among his 25 fractions. A heritage that the earthquake has seriously damaged, as in the case of the church San Salvatore in Campi, unfortunately razed to the ground by the earthquake. Stopping and turning off the engine you can hear only the sound of nature, albeit cruel: even time seems to have stopped on that sad date, without being left again.

The stage of the Flowering: Castelluccio di Norcia and the Pian Grande

La fioritura (or Fiorita) of Pian Grande di Castelluccio it is undoubtedly one of the best known and most important events that have the beautiful Norcia as protagonist. A historical, cultural and naturalistic event, known all over the world. A wonder of nature, a triumph of colors that is renewed every year, between June and July, enchanting everyone. To be precise, however, it would be right to call them the Castelluccio blooms, in the plural, because many different types of flowers bloom.

The area of the  Pian Grande is situated a few kilometers from the historic center of Norcia, located right on the slopes of Mount Carrier. With Mount Guaidone to the south-east, Mount Veletta to the north-west and Mount Ventosola to the south-west, excluding the Carrier (2478m asl), these mountains do not reach very high altitudes but contribute to creating a basin whose flat bottom is represented by Pian Grande. In addition to this, there are two other floors, called Pian Piccolo and Pian Perduto.

These surfaces they were formed over millions of years, with the formation of the chain of the Apennines. The micro climate of the plain is to be considered almost similar to that of the steppe, characterized by large daily thermal excursions. These restrictive, albeit adverse, ecological conditions have been overcome over time from a variety of lentils (Lens culinaris) which today is known as the lentil of Castelluccio IGP.

We thank the Proloco of Norcia for collaboration, texts, information and photos provided.

Image by fausto manasse from Pixabay and Proloco di Norcia. 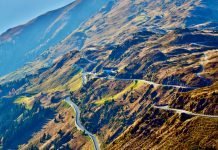