Motorbike itinerary from Arrone (a few kilometers from the Marmore Falls) to Monteleone di Spoleto, through the most beautiful views of Umbria.

Among the ancients villages di Arrochar e Monteleone, the Provincial SP17 winds its way through nature. The road is in some places a bit narrow and with a not always perfect surface, so we recommend a cautious pace, especially to be able to enjoy the view. The peaks of the surrounding mountains dominate, overlooking the Coscerno-Aspra Natural Park, one of the most pleasant and interesting from an environmental and landscape point of view of the entire central Apennines.

Starting from Arrochar we recommend a visit to the spectacular (albeit artificial) Waterfall marmore. The waters of the waterfall are used for the production of hydroelectricity. The waterfall is therefore not always open at full capacity. An acoustic signal warns of the opening of the regulation gates, and in a few minutes the flow rate increases until it gives it the familiar appearance. Access to the park is possible from below (lower belvedere) and from above (upper belvedere) with payment of a ticket. Several paths run through the park and it is possible to walk between the two viewpoints, both uphill and downhill. At night the waterfall is always illuminated by an advanced latest generation LED system, which guarantees a beam of light and uniform illumination. For information and visits www.marmorefalls.it.

Halfway through the route we recommend a stop at Polino, but above all a climb to Colle Bertone which stands at about 1.250 meters above sea level. Almost at the top you can visit the Colle Bertone Trench. Here “L'Ultima trincea”, a Rai Fiction miniseries, was filmed. Today it has been transformed into a lookout point for hikers. Photo by Fabrizio Sciamo, Collebertone, CC BY-SA 2.0.

The historic center is surrounded by walls, with fortified elements and gates, while the internal streets maintain the characteristics of the medieval villages.

The jewel of Monteleone is undoubtedly there Biga, a parade float, an extraordinary product of Etruscan workshops dated around 540 BC. Americans call it “Golden Chariot”, Golden Chariot. TO Monteleone di Spoleto is visible a copy life-size kept in the basement of monumental complex of San Francesco from the end of the thirteenth century.

Do not miss the complex of Santa Caterina and church of San Nicola, with the altarpieces attributed to Ghezzi and Masucci, the clock tower, door of the ancient medieval castle that dominates the village, and the beautiful fifteenth-century Bernabò palace.

Monteleone of Spoleto has a remarkable natural heritage: its territory is located within the Coscerno-Aspra Natural Park, one of the most pleasant and interesting from an environmental and landscape point of view of the entire central Apennines, consisting of a series of imposing mountain ranges separated by narrow and deep valleys. The surface of the territory is mainly covered by woods interspersed with large pastures and small fields, the result of the relationship that has existed for millennia between the natural environment and man. Photo by Zyance - Own work, CC BY-SA 2.5, Link 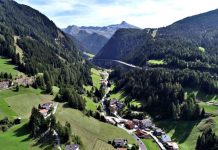 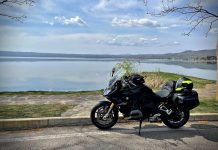 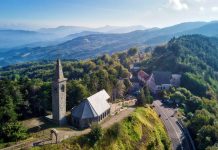