Hungary by motorbike, one of the noblest countries in Europe to discover. Here is the journey of Francesco dal Friuli in the footsteps of Princess Sissi.

Not that it is necessary to have one, but a goal to pursue is sometimes simply more fun, so, from the desire to show Budapest to my wife, a 4-day trip was born, a pilgrimage if we turn, in some places inhabited by the Empress of Austria Elisabeth, much better known by the nickname of "Princess Sissi", who is said to have been the most loved queen in Hungary.

Budapest needs no special introduction. Those who know this city know the magnificence of its buildings and that sense of enormity that one feels in front of buildings such as the Royal Palace or the Parliament.

KESZTHELY AND THE FESTETICS CASTLE

But the journey, starting from the Friuli Venezia Giulia, begins by crossing a piece of the ancient Austro-Hungaric Empire, with the first stage a Keszthely, formerly in Hungary, where the Festetics Castle which was one of the residences of the Princess.

The stage is quite long, about 510km traveled as usual on the urban roads, mine Suzuki DL 650 V-Strom XT it is equipped with its two suitcases of the touring package which contain one the rain suits and slippers and the other the changes for two for 4 days, the top case, which remains free and the tank bag with the chargers, the beauty bag case and the first aid bag (mandatory in Austria and Slovenia) plus a high visibility vest. A few turns on the knob to harden the mono, we reset the odometer and we are ready to reach the Via Julia Augusta, which since ancient Roman times connected Aquileia to the Norica Province or today's Carinthia in Austria (but which also included part of present-day Hungary and Slovenia). We leave Tarvisio behind to cross the first border entering Austria, where we immediately adapt to the strict road rules that require strict compliance with speed limits, above all and rightly so, in built-up areas. The road runs smooth and perfect, in an orderly and clean environment and above all with very little traffic except for the crossings of Villach e Klagenfurt and for lunch we stop on the border, also to get gas. After a, so to speak, light meal, we leave for Keszthely and, as soon as we cross the border, the landscape slowly changes, both from a natural and urban point of view. The Alps give way to gentler reliefs that slope down towards the Hungarian plain and the streets are less well-kept with several neglected-looking houses and an architectural style different from the Austrian ones. We finally reach Castel Festetics in the late afternoon, we park there motorcycle and we use the free trunk to hunt inside the jackets; although it is mid-September, it is almost 30 degrees. Unfortunately we have a bitter surprise: the visits to the castle end at 17:00, so from half an hour before the entrances are forbidden. It remains a valid opportunity to visit the park which, for its magnificence, suggests the splendor in which the nobility of the late 800th century lived. Resting on the benches of the castle, we take the opportunity to book accommodation through the airbnb circuit which allows us to stay inexpensive accommodation with a Hungarian family. Unfortunately at the castle we do not find traces of Sissi but the Princess, unexpectedly, is found in the evening on the very romantic shore of the lake, in the guise of a candid statue in which she is sculpted with one of her beloved dogs.

The morning finds us in motion along the north bank of the lake Balaton, a very beautiful and panoramic road even if the continuous pedestrian crossings and the traffic islands at the entrance of each town remind us to keep an eye on the speedometer. Here, as in Austria, everyone slows down conspicuously at the entrance of each country and I sense that a laser-equipped police patrol could seriously spoil the holiday.

In about two and a half hours we are in weekend traffic Budapest, the entrance to the city is a wide multi-lane road that allows motorcyclists to sneak among the cars even if we don't dare to do so, at least until we queue up to a BMW K 1600 and a V-STROM 650 that literally splash through the traffic; I glue myself to the two local centaurs and with the gas wide open we enter at a charging pace until it is time to separate at a traffic light, after the respective compliments. Where do you go, go, a motorcyclist is always a motorcyclist. We arrive just in time for a sandwich before heading to the Royal Palace. The grandeur of this building can hardly be described in words, from one end to the other of the bastions on which it is built there will be at least 500 meters of which at least half are the body of the building and the rest the annexed buildings. From up there the Emperor Franz Joseph could control the whole city and we imagined Sissi at his side but, once again, we were surprised to visit the Palace because, in the 4 floors dedicated to the history of the Hungarian people, we did not find any finds that mentioned the Princess. In fact, throughout Budapest there is a single bronze statue of Elizabeth, suffocated and almost abandoned in a modest but well-kept garden under the overpass that leads to the bridge of the same name, built in her honor. We begin to think that Sissi, despite how much she had spent on the autonomy of the Hungarian kingdom with respect to the Austrian crown, was not so loved by her subjects. Here too we take accommodation through the Airbnb platform and find it on the outskirts, where an entire apartment awaits us all to ourselves, welcomed by a kind lady with whom we communicated using the Google translator. Budapest is very busy but also disciplined, however you have to keep your eyes open because it is full of traffic lights.

The last attempt we have left is to visit the Fishermen's Bastion where stands the Matthias Church, place of Elizabeth's coronation as Queen of Hungary. We take the motorbike parked under the bulky walls and start a tour of the busy city. Riding a motorcycle in two has its advantages: while the rider remains focused on driving, the passenger provides him with directions directly through the intercoms, without the need to look at the navigator. The slim Suzuki suitcases then do not give any hindrance if you can adapt to their limited capacity. Thus we arrive in front of the ramparts of the Bastion and park almost in front. Once again we arrive too late: the church is only open for religious services and the last one was just finished. Once again, we just have to settle for the outside. Sissi was very reluctant to the formalities of the time and perhaps for this reason we do not find her in the most important places.

Our last hope lies in Gödöllö a town about an hour east of Budapest where a castle was built which later became our Princess's favorite home. The road is a bit monotonous because it is almost straight but at least you can run a little, the V-Strom is very economical in consumption and, despite two with suitcases, it stands at an excellent 23,5 km / l with petrol at 95 octane which, in my opinion, also makes less mileage. The castle it is second only to Versailles and reserves us the most surprising visit regarding the history of the ruler, it is here that, finally, we can find the vestiges of the most famous princess in Europe: Elizabeth of Bavaria, Empress of Austria and Queen of Hungary, Princess Sissi. In a drunkenness of paintings, statues, photos, documents of the time, we leave satisfied to have hit the target of our motorcycle trip in the land of Hungary. Now we can finally go home. We will do it through another road, through Slovenia, also once under Hungarian rule.

The return home is by the shortest route, but always without a motorway, which sees us fix a stop in Maribor in Slovenia where we booked an apartment this time through the Booking platform. The road to the border is at times monotonous and boring, until, when the sun goes down, it starts to get busy because we finally reach the mountains that mark the border between Hungary and Slovenia. The sun is now a little light and we try to force the pace so as not to find ourselves in the middle of the mountains in the dark, but we can't. Suddenly, almost without realizing it, we cross the border. We stop to put on the quilts of our jackets, it starts to get cold and damp, the road is narrow, bumpy, not lit at all and the abandoned cottage of the old customs house has something spooky about it. We climb up and leave quickly, hoping that some animals do not cross the road and that the asphalt does not get worse but, as soon as we pass the sign that reads "Slovenia", the asphalt surface becomes smooth and the poles that seem to have just been placed reflect the light of the headlight drawing the path in front of us, also helped by a newly repainted centerline: a Moto GP track compared to the Hungarian motocross one. Although the road remains a billiard table, they disappear in order: the poles, the center line and finally the carriageway narrows. We trust in the navigator and in the two cars that we cross, indicating that we are arriving somewhere and at 21:00 we cross the hill and go down to Maribor, where they are waiting for us to sleep.

The morning of the last day of travel includes a lunch stop at Ljubljana, the Slovenian capital, small but always fascinating and romantic, with its castle in the center, on the hill and surrounded by the river, and its market in the square. We border on Gorizia, crossing the Collio and we return home with the majesty of Sissi's palaces still in our eyes. 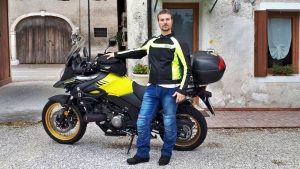 Photos and text by Francis Tamai.