Alsace and Black Forest by motorbike. A journey within everyone's reach, close to Italy, through two European regions rich in history and incredible landscapes. The story of Denise and Davide.

Fairy tales have always attracted everyone, from adults to children, for this reason, for the holidays of the past summer, we decided to immerse ourselves in a fantastic atmosphere, surrounded by gnomes, fairies and little elves. And where to go if not in the Brothers Grimm's favorite area? Alsace and the Black Forest, in enchanted places suspended in time. Immersed in these infinite woods which, contrary to the sensations that the name wants to evoke, have nothing scary at all, we spent twelve days of tranquility and adrenaline, between curves and hairpin bends perfect to do in the saddle of ours. motorcycle.

The departure immediately puts us to the test, we have to face a heavy downpour at the Gotthard Tunnel, but we are not frightened by anything and like us also our trusty mount, the Africa Twin Adventure Sport, a name, a guarantee! So, we put on the suit and we move towards our first destination, the picturesque town of Mulhouse, where we find the sun waiting to dry us.

For the next five days of travel we decide to keep it beautiful Strasbourg as a reference point and from there to discover the most beautiful roads of the Black Forest. Through the Bundesstraße 500, we reach it Schluchsee and the neighbor TitiseeTwo lakes considered as the pearls of this area of Germany, where you can practice numerous outdoor activities, such as windsurfing or sailing. After a short stop, our road-trip proceeds towards the homeland of the cuckoo clocks, you must know in fact, that they were invented right here by Franz Ketterer in 1738 and which can be observed along the Deutsche Uhrenstraße. Our itinerario leads us to Triberg, an ideal place for clock-themed shopping, but it is only by moving a few kilometers further north that you can see the largest cuckoo clock in the world, at Schonach, it has a gear the size of a house! To end the day we reached Gengenbach, a picturesque village full of half-timbered houses and flowers everywhere.

Alsace and Black Forest by motorbike
1 of 9

The third day of travel led us to the discovery of other corners of the Black Forest: after crossing the Rhine we took postcard-like streets and hairpin bends, heading north-west, until we reached the characteristic town of Baden-Baden. City famous for its centuries-old spas (those of Caracalla are even from the Roman era!), For its casino considered as the most beautiful in the world and for its pastry shops. And we as gourmets as we are, could we not taste the Schwarwälder Kirschtorte? It looks like a tongue twister, but in reality it is the typical cake of the area, a caloric delicacy that recalls the name of the Black Forest and its symbols. We enjoy a nice tour of the city and a splendid sunny day, which makes the landscape even more impressive.

The next morning the alarm goes off early, we have about 300 km to go, this time on the French side. We leave Strasbourg and after an hour of travel we arrive at the castle of Haut-Kœnisbourg, a recently restored XNUMXth century medieval fortress, which houses faithful reconstructions of furniture and artillery inside. From here the view over the valley is impressive and the gaze is lost on the Alsatian hills, which we walk on our descent towards the village of Riquewihr. We move on some stretch of the Wine Route, one of the itineraries most impressive food and wine of Alsace, which crosses tiny villages with pastel-colored houses, medieval castles perched on the peaks of the hills and vineyards as far as the eye can see. Since the day reserves us a sun and an enviable climate, we decide to make one last stop before returning; so we take the state road D431 which takes us to the top of the Col du Grand Ballon, the highest peak of the French Vosges. A road that every motorcyclist should travel, full of challenging curves and hairpin bends, with an increasing slope up to the famous peak of 1343 meters.

The seventh day of travel sees us leave our Strasbourg base to move to Germany and reach Stuttgart, where we will spend the night. On the way, however, we stop in the castles among the most evocative of the Baden region: Burg Hohenzollern e Schloss Lichtenstein. The first is a majestic manor that was built on the top of the mountain of the same name, at an altitude of 855 meters, in the XNUMXth century by the Prussian family of the Hohenzollern who still live there. It looks like a real fairytale castle, it is even said that Walt Disney himself took inspiration to make Cinderella's one! Its interiors are elegant and sumptuous and to avoid damaging the prestigious marble floors, they make us wear funny wool slippers! The second, on the other hand, is surprising for its size (it is really small!) And for its position, perched on a huge rock that seems to support all its weight, a true engineering miracle! It is still early to take off the royal clothes, so we don't even spare ourselves the great one New lock (Castel Nuovo) in Stuttgart. An explosion of different styles that dominates the entire city square, once a royal residence and now the seat of several government ministries. Our day can only end like real Germans: a double portion of wurstel and chips, bathed in a pint of excellent local beer! Wunderbar!

The German stay is about to end, the last days of travel will be spent in France, between the regions of Alsace and the Rhône-Alps, to travel the most fascinating and spectacular roads ever. We leave, so Stuttgart to head south and visit Colmar. One of the jewels of Alsace, the heart of the country is the old town, called Petit Venise, a succession of canals, characteristic alleys and picturesque corners. Every corner is a postcard to be photographed and with the sunset lights the canals are tinged with pink. A romantic marvel! To add to the atmosphere we dined in an old restaurant on Rue de la Poissonerie, an impeccable and tasty Alsatian dinner that we recommend to everyone!

But also the following evening we had to deal with some local delicacies; reached the village of Annecy and now resigned to returning with a few extra pounds, we enjoyed the excellent raclette, a cheese that is placed on a heated metal structure and once melted it is slipped onto sausages or potatoes. A succulent delight!

After all this food it was necessary to do some exercise (and not on foot this time!). the next day we decide to take the A43 to the Pass of the Chaussy, a mountain pass that is 1533 meters above sea level, but to reach it we run into a real challenge! Along the famous road D77B we meet the most extreme road in all of France, i Montvernier Laces: these are 17 very tight hairpin bends, which within 3 km reach an altitude of 1400 meters, with a maximum gradient of over 20%! The road is very narrow, but it is in excellent condition, even if the concentration must be at the highest levels! An exciting experience that we will not easily forget! After this spectacular stretch, the road continues its ascent through hairpin bends and straights, towards the Col du Chaussy, the Iron Cross Pass and Glandon Pass, all famous stages of the Tour de France that exceed 2000 meters. The panorama extends to 360 ° on the Savoy Alps and the descent is accompanied by woods and alpine villages.

Not sated with breathtaking roads, as every good motorcyclist must be, for the return home the most spectacular road ever awaits us, so much so that in 1991 it was proclaimed national heritage of France: the Cirque du Combe Laval. Starting from Saint-Jean-en-Royans you follow the D76 towards Vassieux en Vercors, this road was built in 1897 to transport timber and is now regarded as a biker's paradise! In 12km you go from 270 meters to over 1023 of the Col De la Machine, the gateway to the Combe Laval to then travel about thirty kilometers of roads carved into the rock, with breathtaking views, hairpin bends, tunnels and balconies over the valley below.

This panorama takes us home, where, after twelve days of travel, 4000 kilometers traveled, about 400 photos to fix and an indefinite number of emotions, we put the bike to rest to enjoy a year of memories, ready for the next unforgettable holidays. . 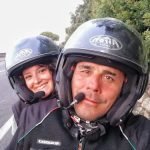 We are Davide and Denise, a couple who loves to travel and grind km on the saddle of our beloved african twin Adventures! Every free sunny day for us is equivalent to a day of freedom, cold or hot we are always ready to jump in the saddle. The kilometers are never too many and we hope soon to make our dream come true: to reach the North Cape!

Don't miss out on the ITINERARIES and VILLAGES most beautiful in Italy, TRAVEL and ADVENTURES, TOURS and SCHOOLS, ANNOUNCEMENTS', the EVENTS and our NEWSLETTER. Photo Credits Denise Gobbi