Riding a motorcycle in deserts and dunes is within everyone's reach: learning directly on the field, with the right bike and the right instructor.

Pietro Tupputi explains to us, in 2 articles, the theory and technique that are the basis of his courses in the deserts of Tunisia and Morocco.

Ready Set Go!!! Remember that the clutch should never be stressed beyond measure, once released it is useless to insist with continuous friction, the wheel will probably spin idle and you can help yourself a little with your legs to get some speed to the motorcycle, well at this point it is necessary to know that if we insist with the first the bike will continue to sink with the rear without gaining speed, at this point the second must be inserted and as if by magic the rear will come out of the sand and the bike will pick up speed, well as soon as you have conquered your floating speed, the one that will allow you to do more or less everything, as long as you turn wide with trajectories that never make you lose that minimum speed. It is necessary to understand immediately how to stop, the front brake is almost forgotten, you can caress the rear a little and you must always put the bike slightly downhill and never with the nose uphill, otherwise the rear will sink and prevent the subsequent restart. . 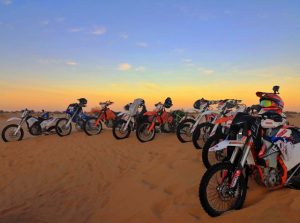 Parking! The time has finally come to park the bike, face downhill, get up from the bike, let go of the clutch keeping the front brake pulled and gently sink the rear into the sand, taking care to stop before "burying it "Completely. When parking for the night it is advisable to open the kickstand before sinking the rear, it will then act as a stabilizer. For the restart, the above is valid.

Let's face the dunes! Initially, the advice is to tackle climbs and descents following the line of maximum slope and never cutting them diagonally. We said that we must have at least the second one inserted, the engine must be cheerful, which means not a limiter otherwise we will not be able to accelerate further, but not even at idle because it would not allow us to resume in case of soft sand. 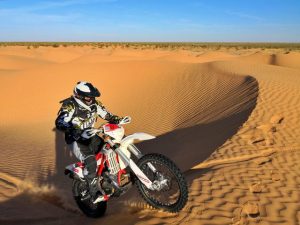 The difficulty at the beginning is being able to get to the top of the Dune and being able to stop putting the front on the other side, with the nose going downhill as already mentioned. If we close the throttle too soon we will stop on the climb and the only solution is not to insist with the gas so as not to make the bike sink, go down, take the handlebars firmly, drag the bike up to bring the front down and it starts again, turns wide and tries again. If the bike was already sunk it is necessary to tilt it on one side to the ground in order to let the rear out, then raise it and continue as in the point above. I remind you that it is better to make a mistake by stopping first, than to arrive by cannon flying over the dune, which I remember should never be skipped. Here someone will say "But haven't you seen in California what jumps they make on the dunes?"… Forget it and think about health. It would be enough to think of the fearsome Barcane, the cut dunes made famous by the videos of the first ones Dakar Rally.

The downhill it must be faced with weight completely backwards, front brake to forget (except the sand is hard as the asphalt, for example after a copious rain) and if the front tends to sink it is necessary to give a little gas to lighten it. In case you feel intimidated by long descents and very high inclines, it can be reassuring to keep the left foot on the ground which will help stabilize the bike. However, it is necessary to have a minimum speed, going down too slowly will give you a precarious balance, going down in a "cannon" could make you do a nice overcoat in case of unevenness or steps, often present at the end of the descent, so as always the advice is not exaggerate.

The tongues of sand: when entering sandy areas characterized by soft sand channels it is necessary to slow down first, in case you also downshift a gear and face the canals with all the weight backwards and with slight acceleration, the front must remain light in order to float. One thing not to forget is to always look exactly where you want the bike to go. 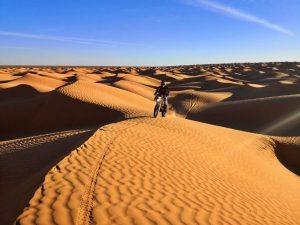 Trajectories: we have said that they will have to be wide to avoid losing speed, with experience you will be able to understand the best side, the one that the wind has compacted. An expert guide will allow you to tackle the dunes using the best trajectories, which are not always immediate to recognize. It will make you identify the exact point where to pass, facing for example the slope with the least consistent sand. You will learn this and many other useful secrets to lead in safety and greater peace of mind.

The sand: some after an hour think they have understood everything, after fifteen years of sand, I still find situations that had never happened to me. The consistency of the ground changes according to eventual rains, sandstorms, repeated passage of vehicles ... The sand can be more or less soft in different areas, even relatively close to each other. The wind or, worse, the storms deposit a lot of soft sand and definitely complicate the evaluations on the best trajectory. The isolated dunes are very often less consistent, because they are created by continuously deposited sand. Behind a dune you could find obstacles, you must always take them into account, bushes, holes, stones, a motorcycle on the ground ... It is necessary to know the different types of dunes, the Barcane temili, the spectacular Sif, the troubled Ghourd and the winds that shape them ...

The Desert is a spectacular world that needs, like all nature, respect and attention. You just have to try this wonderful experience and its thousand emotions, in the company of an excellent guide who will take you, in complete safety, to fantastic places to discover on two wheels! 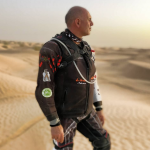 Peter Tupputi boasts over ten years of experience in motorcycles as a former rider, driving instructor, mechanic and rescuer. He spends most of his time in the desert on a motorcycle or 4 × 4. For over 10 years with LIVE OUT, organizes and accompanies people on road and off-road trips.

TOM42 at enduro school with Botturi and Yamaha Ténéré