Going off-road has a thousand shades of gray. We have decided to join a session of enduro specialist with Oscar Polli, federal instructor, and some of his "students" for a day of those "tough".

Here is the report of our day of pure enduro on a mule track bringing the Honda CRF Rally 250 really to the limit of its possibilities.

A bit reckless and a bit curious, we decided to use the Honda CRF Rally 250, which I call a nice Thai scooter slightly all-rounder, and literally take it to the limit. "Slightly" because, although qualitatively valid, it has objective limits for power, weight and measurements that allow it to be used "lightly" on asphalt, dirt roads, transfers (unless you want to spend a lot of euros for substantial changes). Mindful, however, of the "performances" at the Rally dell'Umbria, we prepare the motorcycle and let's go carefree ...

The day is itinerant through the splendid woods of the Biella hills. Let's start from Santhia, from the Motocross Track, with Oscar in the lead and the “class” behind, all equipped with light and powerful specialist KTM and Husqvarna enduros, obviously with the right tires. I follow closely with the "Baby Rally", very beautiful aesthetically, but with over 157 kilos of weight (plus inner tubes and gps) it is like having the "ballast" behind and under a resistant engine that must always turn a lot high to push (and often can't).

HOW DOES IT GO (in conditions of medium difficulty)

I immediately understand that it will be a little fun day for me. The "dual" tires, Pirelli MT21, they are immediately filled with mud and we are already struggling in the first technical sections with slippery and muddy surfaces due to recent rains. The weight of the bike is felt immediately: at low speeds the steering closes to each stone / log larger than average. I really thank Oscar for the lessons learned during the previous Enduro and Cross courses, without I would not have reached the end. However, the fatigue is considerable. You always have to keep her revved up to get on the mule tracks that are becoming more and more treacherous, stand almost constantly with the bike tightly between the legs, always give the throttle, in all conditions so as not to lose momentum and avoid bouncing on obstacles.

The original suspensions they don't help, should be changed, as well as the optical group and the fairing that add weight at the top together with the large tank. It is also true that the windshield saved us from brambles and branches.

So while the others have a lot of fun and go up quickly on the splendid Piedmontese paths, through woods and passages that I never imagined could be done by motorbike, we unfortunately deal with the limits of the "scooter" and with the falls that add further effort to raise it in the worst conditions / positions. But we do it, thanks to the technique learned in recent months with the School of Oscar Polli, the willpower, the spirit of survival and the excellent linguine with meat sauce that the tavern. 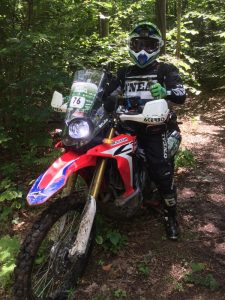 It is cool enough for an aperitif in the city, comfortable for short trips and at low speeds, enough for Strade Bianche, light dirt roads and amateur “rally”. The ergonomics are good, the footpegs need to be changed with a pair of larger ones, the low saddle helps maneuvers in the city and prevents falls (not without significant kidney blows), the windshield protects quite well.

However, given the numbers, it remains a vehicle much loved by its fans, who could, also through the courses and experience of federal instructors such as Oscar Polli, learn to use it to the fullest and also know its limits, also not to accidentally find themselves in difficulty, which on a motorcycle is never beautiful.

In my opinion, if the intention is to seriously off-road, even as a novice, stay away. If you need an everyday mule with occasional light or undemanding off-road rides, it might be fine for low costs and long maintenance intervals. I know people who have spent several hundred (and thousands of euros) over it to redo the suspension and / or the engine, but is it really worth it? Posterity will judge!