The Parma hills “behind the house”: a small ancient world of curves and hairpin bends

Having a bike ready to go around the world also serves to let off steam a stone's throw from home between a work commitment and the family. The important thing is the experience and the sense of satisfaction, however short it is (ed).

Foreword by the author

While the maxi-enduro market propagates and propagates stimuli that are difficult to achieve (such as logistics and finances) by producing motorcycle which, in theory, can cross the most remote lands of Morocco, on the other hand we tend to forget that there is a "small ancient world" done of curves and hairpins (as well as rough asphalts) within everyone's reach, since it is behind the house.

"Imagine leaving the office, picking up the children from school and still having a couple of hours to give vent (and gas) to your dozing twin in the garage."

If you don't have any pretensions to itineraries noble but you know how to find the adventure among the ups and downs of the pre-Apennine hills, this is the itinerary for you!

Our RAID kicks off at 17:30 pm on a midweek day at the end of September. We are on the outskirts of Parma and we still have a couple of hours of light available. Street Emilia towards Piacenza it is congested by traffic, but the stretch of SS9 to cover is very little. Here the only real effort required of the motorcyclist is to be patient and not throw yourself into risky overtaking (so much does it proceed in fits and starts). Crossing the ancient bridge over the River Taro at a walking pace, the blessed passage towards the South materializes: go, the gas opens! We reach walnut grove and we continue towards Medesano, taking the Provincial Pedemontana Road that we walk until we find the “South-West passage” - the definitive one - towards the hills, leaving behind us the last trucks and plunging into the countryside where cars are rarer and cyclists more frequent. We plow the SP64 at cruising speed aiming Varano Marchesi, the last village in the foothills, after which we swerve sharply to the right, climb into second gear and climb towards the built-up area of Mezzadri houses: here begins an unexpected Grand Prix of the Mountain, with tight switchbacks in series. The V-Strom does not let itself be begged and with its exciting low torque it reaches the new altitude of 364 meters without hesitation. Not even the time to admire the orderly agricultural landscape from the coast on which we climbed, which is already time to descend. We let ourselves be led by the sinuosity of the Route of the Baths, direction Salsomaggiore.

Itinerary on the Parma Hills
1 of 6

The asphalt is bad, you have to be careful. Everywhere there are cracks, bulges, holes, gravel stretches in perennial remaking. Riding a road endurona gives safety, even if the standard suspension setting (which is, moreover, adjustable) of the V-Strom is in some places a bit stiff; in some moments we would like a 21-inch rim or even a motocross bike on the front (we meet and greet various cross riders during our trip, as the area is full of carriageways as well as a regularity circuit). But they are just moments. Playing almost exclusively between second and third gear, the V-Strom proves its character: with a little gas we are out of the way and we never lose the trajectory. On many occasions it is instinctive to get up on the platforms, move back the center of gravity and squeeze the tank between the legs (as Davide Degli Esposti taught us at the V-Strom Academy). In short, it is a real raid in the hills!

Meanwhile, we are approaching another decisive crossroads. Depending on the mood we can choose whether to head north-east and visit the church of Tabiano Castello (a XNUMXth-century Romanesque-style building, whose stone facade with white Carrara marble ornaments is a small architectural jewel), continuing on to the fascinating streets around Salsomaggiore Terme (itinerary that requires the minimum effort to look at the road in front of you every now and then, as well as the views); or, feeling more adventurous, we can persevere in the ascent towards Pellegrino Parmense. This second option in turn opens up a wide range of intriguing destinations, all in the South-West, and is therefore recommended for those who are not afraid of returning home a little later; above all we recommend it to those who are never satisfied with curves and hairpin bends.

Today the mood is combative and we recommend a further ascent along the SP 359 R. Ready go! A few kilometers and we come across another unsuspected Gran Pren Premio della Montagna: very narrow and wonderful hairpin bends in rigorous solitude (no GS or Africa Twin caravan to reach high-altitude restaurants) because at the top there is no food and wine refreshment but only the altitude. 650 meters above sea level of the Valico Sant'Antonio. To say "only" is unfair, since at this point the view is remarkable in every direction, except for the gigantic antennas and mammoth repeaters that remind us how much the adjective "pristine" is to be used sparingly. [PHOTO 5]

We take advantage of the five notch "field" to call home and hear if everything is OK. (Perfect, no lecture so far!) It's 18:30 pm and we still have an hour of daylight to get back to ours passivated, store the motorcycle in the garage, take a decompression shower and show up in front of the risotto at 20:00 perfectly drained from stress.

Halfway point and back

Continuing towards the mountains one would arrive without too much effort (and notable pleasure) at the majestic castle of Bardi, an imposing fortification that stands on a rock of red jasper and which, in addition to representing one of the greatest examples of military architecture in Italy, it is said that it offers a home to the ghost of poor Moroello, a knight who took his own life on his return from the war after having learned the news of the suicide of his beloved Soleste; however, we would need another hour and a half between the round trip, so we apologize to Moroello, proposing to go and visit him again, more calmly.

We therefore opt for a return with ample room for improvisation. We head towards Fornovo and the exit of the A15 Parma - La Spezia (exit that DON'T we take and that we pass with a gust of taste because, as you will have understood by now, in no case and for nothing in the world we would go to put ourselves in the motorway hell). Do we or do we not have dozens and dozens of peripheral streets yet to be discovered? Why spoil the game for us? Let's try to invent alternative routes between Felegara, Sant'Andrea Bagni and the last - perhaps tastier - Grand Prix of the Mountain (the third!) Of our itinerary, which leads us to dominate fields, tractors and farms in the distance from the top of the magnificent coast of Miano, at the gates of Medesano. We go down in a moment, retracing the road to Varano Marchesi with Olympic calm, but we are tempted by a brown sign (the one for tourist information) that reads soberly: "2 Km to the Cross".

The heat emanating from the 1.037 cc of the V-Strom does not bother us, on the contrary, with the cooling air it convinces us to continue. It would be a shame to stop right now that the feeling between bike and rider has reached its peak. No sooner said than done! We turn and face the last climb of this small midweek raid. In a matter of minutes, between the roar of the V-twin that asked for nothing more and the feeling of total control of the vehicle, we arrive in front of the open-air church on Monte Pié and finally admire the great "Cross of the Merciful Jesus" up close. . Believe it or not, we receive the grace not to miss the desert. The atmosphere - here we can say it - is uncontaminated. The chaos of the city, in which we will rebel shortly, is no longer frightening: 100 kilometers of free improvisation while driving have made it harmless. As you breathe in all the magic and splendor of the sunset, your cell phone rings: "It's on the table. Where are you?".

Among the thousands of answers that appear plausible to us at this moment (Paradise, Africa, Mongolia, etc.) we cannot hold back the satisfaction in answering: "Right behind the house."

Ugo Cattabiani it describes itself like this: “The classic 10.000-kilometer-a-year motorcyclist, usually solitary and relatively unadventurous (despite the travel companion, a Suzuki V-Strom 1000 ABS, flaunting the captivating Sport Adventure Tourer wording on the tank). Nevertheless, in harmony with the 20-liter tank of the V-Strom, the writer is attracted by open spaces with little traffic, he does not use the navigator but the simple sense of direction, he loves the Tuscan-Emilian Apennines and for nothing in the world one would go to slip into a highway. Agree to set ourselves ambitious goals, but we must admit that the real pleasure is to travel along provincial roads and through villages with unknown names: with 300 kilometers of autonomy, we can afford the luxury of losing and finding our way again, without too many anxieties about when we will meet the next distributor. " 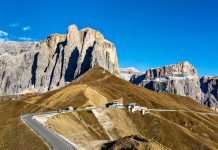 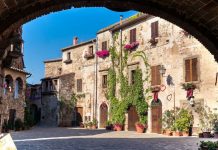 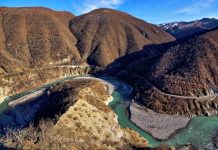