Aprilia All Stars celebrates its history with an unforgettable event among the famous corners of Mugello in the company of many champions on RSV4 1100 Factory.

Over 10.000 enthusiasts from all over the world met at the Mugello circuit on Saturday 23 March, we have been there and we still have a thousand adrenaline!

We have also decided to bring Marco's historic single-seater RS250 to “baptize” it in the “cult” circuit of Italian motorcycling, as well as a witness to the countless victories that our Champions have achieved on their Aprilia. 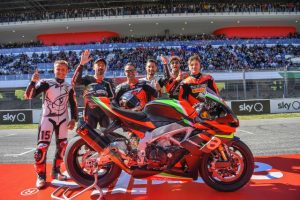 Arrived on Friday evening we were already thrilled by the atmosphere as in the world of toys. After all, as kids there were no cell phones and social networks, and the motorcycle of Noale, from fifty to one hundred and twenty-five, were the center of our universe.

The day opened with a program full of events; starting from the presentation of theAprilia Racing Team Gresini with the new RS-GPs with the rider Andrea on board Iannone and test driver Bradley Smith. 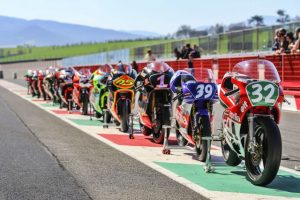 The long line of bikes that have marked the history and successes of Aprilia has been set up in the pit lane. And the witnesses of those successes and those enterprises were almost all: Loris Capirossi, Roberto Locatelli, Alex Gramigni, Lorenzo Savadori and Manuel Put them on, who joined the team on the new bestial on the starting grid RSV4 1100 Factory da 217CV, while the "corsair" Max Biaggi unveiled the edition as a world premiere RSV4X, born to celebrate the tenth anniversary of its birth, produced in only ten specimens with its X e 165kg. Marco could not resist and Max Biaggi had his bike signed, which will now obviously be an integral part of the living room.

For those nostalgic for two-stroke engines and the scent of the mixture, Max biaggi he boarded his old woman RSW250 from 1995 for a memorial tour. Finally, the riders took part in a fun Le Mans-style race, riding the scooter Aprilia SR 150, won by the wild Manuel Poggiali. 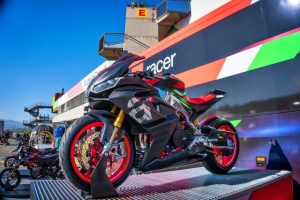 The afternoon was instead a bomb of adrenaline: in addition to the tests of the Dorsoduro 900 and the Shiver 900, we fastened the helmet for the test of the new RSV4 1100 Factory: from pure terror to extreme fun in a matter of seconds!

we at Moto Excape we are first and foremost travelers and not track drivers, we must admit, for this reason our experience on the track is certainly not that of many colleagues but this is where the best part comes: first lap with confidence, second lap with an increasingly printed smile, third lap and following mouth and gas wide open without restraint! The RSV4 1100 factory has a 217hp heart in perfect harmony with the chassis and electronics and it allowed us to feel on that saddle as if it had always been ours, intuitive, decisive and safe. The sound then acted as the soundtrack for those laps, which, in a few curves, have become a symphony never experienced before.

With our hair still straight, at sunset, we got back on track with all the bikers who reached the circuit on their Aprilia, for an exciting parade that filled the curves of Mugello. Plus community fans #bearacer they were able to meet the drivers and share a real day of celebration with the whole team, including music, street food and merchandising areas. 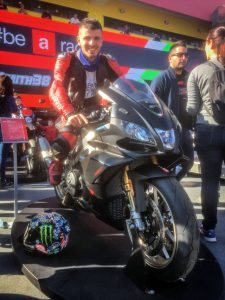 As fans of motorcycles and Made in Italy, this event was a unique experience, a dip in history and we can't wait to return next year.

Aprilia really made a huge gift to all its fans, first of all because the event is free and then for making the fans the real protagonists of the history and future of this famous brand.