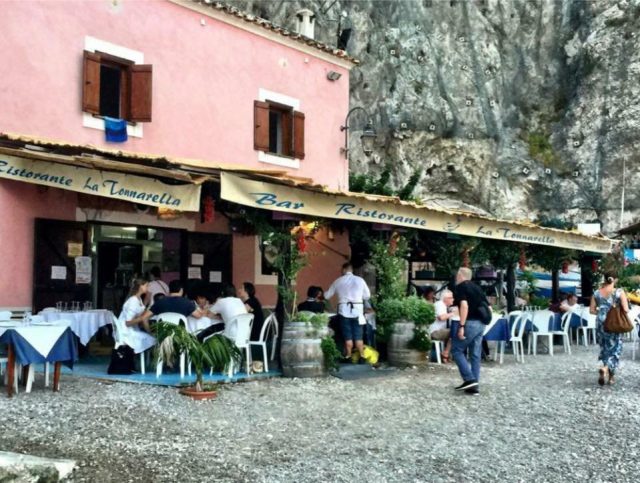 Information
A typically seafood cuisine that reaches excellence with the famous "spaghetti and zucchini" and "pezzogna acqua pazza".

Built at the end of the sixties thanks to the skilful transformation of a room used as a custody of the tonnara (hence the name), a particular network with which tuna were fished in the sea area in front of it, it was the first intelligent manager. entrepreneur Umberto Lauritano, better known as “O 'Bacchiss”, of ancient maritime origins. At that time the Conca dei Marini beach was still scarcely frequented; there were only a few umbrellas and a few old fishermen's boats. Then came the notoriety and the "boom".

There is a long list of important personalities who, over the years, have frequented the splendid "TONNARELLA", delighting in a typically seafood cuisine that reaches excellence with the famous "spaghetti and zucchini" and the masterful "pezzogna acqua pazza" ".

The significant presences of illustrious personalities such as the first Lady Jacqueline Kennedy, Margareth of England, guest of the d'Urso family who own a villa a few steps from the marina, the shipowner l'Onassis, Caroline of Monaco, who wanted to baptize her daughter, stand out. in the adjacent church of the Madonna della Neve.

Today the restaurant is managed with skill and competence by the sons of the historic owner Umberto Lauritano, Angelo, a friendly and always available chef, and Franco, a caring and polite public relations officer.

Both jealously and zealously guard the fame and success of a place as prestigious as it is characteristic and engaging.